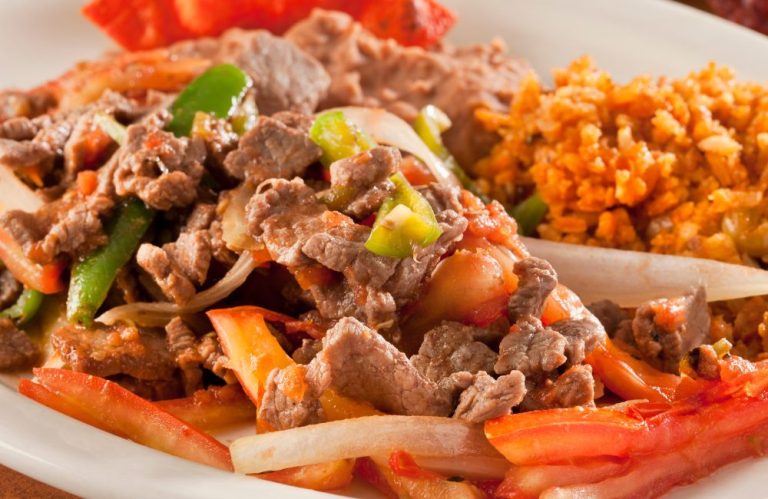 Do you know any of the best sweet and spicy chicken dishes in South Korea? No, it’s not fried chicken – although it sure is tasty. It’s Andong Jjimdak, a sweet, savory and spicy dish made of chicken stewed with vegetables and sticky (or glass) noodles. Andong Jjimdak hails from Andong, a city in the south of South Korea, and is known for being fairly inexpensive compared to quality or value for culinary aspects. The portions are huge and filling because there are so many vegetables in the dish.

Andong Jjimdak is inspired by the traditional Dakjjim and developed as School District Food for students with a lot of vegetables. However, it is becoming more and more popular and loved by Andong locals and tourists these days. So let’s check out Andong Jjimdak today!

Andong Jjimdak is spelled 안동 찜닭 in Korean. Andong refers to the city in the south of the country. It is the capital of North Gyeongsang Province and is known for its rich culture and folklore. It is a very old and historic city and was very important during Joseon times. Today, the center of Andong is still full of beautiful old buildings, and there is even a traditional village, 한옥마을, in the city.

찜닭 literally means steam chicken. 찜 refers to dishes that are stewed, steamed or simmered in a sauce, and 닭 means chicken. So 찜닭 is a common preparation for chicken, but Andong Jjimdak is a special local variety that is the most popular kind of Jjimdak in the whole country.

Andong Jjimdak is made by braising large pieces of chicken, vegetables, potatoes and glass noodles in a spicy soy sauce-based liquid. The ingredients are simmered for quite a long time, making them soft and chewy and infused with flavor. Unlike other chicken stews, such as Dakbokeumtang(닭볶음탕), no gochugaru (Korean chili powder) or gochujang (Korean chili paste) is used, only fresh and dried whole peppers! This gives the dish a nice, fresh kick.

Making the dish is quite simple. You just need to cut the vegetables and chicken into equal pieces and add them to the sauce you made earlier. The longer you braise the dish, the better it tastes.

Because the dish uses relatively few expensive ingredients – a whole chicken and seasonal vegetables – restaurants can offer large portions for a fair price. This makes it a popular dish among students. Office workers also like to eat Andong Jjimdak for lunch or during a company dinner. The dish is always shared.

We once organized a food tour for a world famous famous chef from France and he said that Andong Jjimdak is the most underrated korean food because in taste it is not inferior to a high end French chicken dish made with the same ingredients and that it is difficult to believe that such a great dish can be eaten for such a low price.

So, where did Andong Jjimdak come from? Some people think that this dish was eaten as far back as Joseon times (from 1392 to 1897). Andong was the center of culture at that time and many rich people lived in the inner city. It is speculated that Andong Jjimdak was only eaten by the rich people (Yangban in Korean) during special occasions. However, there is little to substantiate this rumor.

It is more likely – and factual – that Andong Jjimdak originated in markets in Andong in the 1980s. During this time, fried chicken stores became more and more popular in the country. The market vendors at Dak Golmok in Andong (닭골목, which literally means chicken alley) saw fewer customers passing by and wanted to create a dish that could rival Western chicken shops.

They used ingredients that were locally popular, such as glass noodles, potatoes, and whole peppers, to create a sweet, spicy, and savory dish. Served very hot, in large portions and at a low price, the dish quickly became popular. Many people traveled to Andong to try the stewed chicken, and the dish eventually became popular all over South Korea.

Today, there are many restaurants serving Andong Jjimdak all over the country. Usually you can get a traditional variety, but also special varieties and less spicy dishes.

Let’s take a look at what’s going on in Andong Jjimdak. The dish consists of two parts: the sauce, and everything that is simmered in the sauce.

The sauce used to braise the ingredients is sweet, savory and only slightly spicy. Usually it is made with soy sauce, oyster sauce, rice wine, dark brown sugar, Korean Mulyeot (물엿, a very sticky, viscous sweetener) or corn syrup, pepper, minced garlic, chopped ginger, sesame oil, and water. All this is combined until you get a dark brown, sticky sauce.

As you can see, there are no peppers in the sauce, not even a chili pepper. The sauce, and therefore the entire dish, becomes spicy because whole peppers are smothered in the sauce.

The sauce is then used to braise a variety of ingredients. There are always pieces of chicken, usually with the bone in. The pieces can be quite large. White potatoes are also added because they really absorb the cooking liquid. Carrots, onions, and mushrooms are also cut into bite-sized chunks, about the same size as the chicken. Korean glass noodles, which are made from sweet potato starch, are also added to provide some carbohydrates. These noodles are very chewy and soak up the sauce. Spring onions and sesame seeds are used to garnish the dish.

The secret ingredient in Andong Jjimdak is whole peppers. Dried and fresh chillies are added whole to give a spicy flavor to the whole dish. While braising, the herb slowly leaks into the sauce, making the whole dish taste fresh and spicy. This is a very different type of spice from the Korean gochugaru (red pepper powder) and gochujang (red pepper paste).

How To Make Andong Jjimdak & Recipe?

Combine all the ingredients for the sauce before starting the cooking process. The sooner you do it, the longer the flavors should infuse. Cook the chicken in a pan for 1 minute to remove any fat. Drain the water and add the sauce. Cook together over medium heat for about 10 minutes. Add the potatoes, carrots, onions and all the peppers and cook for a further 7-10 minutes. Reduce the heat, stir well and cook for another 10 minutes. Remember, the longer you cook, the more the flavors will permeate all the ingredients!

Add the mushrooms and glass noodles and cook for a further 3-5 minutes, or until the ingredients are set. Garnish with the spring onion and sesame seeds. Andong Jjimdak is best eaten with some plain white rice.

There are not many variations of Andong Jjimdak as it is a fairly new dish. Yet you often come across different types of Jjimdak in restaurants. Some restaurants offer the boneless chicken dish – much easier to eat, but some people find that boneless chicken has a superior taste. The Jjimdak can also be made less spicy, or the sauce less dark. Leafy greens such as spinach and bok choy are also sometimes added to give the dish some texture.

Recently, Jjimdak cheese has also become popular. Cheese is added on top of the dish just before serving so that it melts and becomes soft. It pairs nicely with the spicy sauce as it creates a balance. However, opinions are divided, because the dish is quite sweet and not everyone likes the combination of cheese and sweetness.

Luckily, you don’t have to travel all the way to Andong to try Andong Jjimdak, although you definitely should if you have the time! Seoul also has plenty of nice restaurants that serve really good, authentic Andong Jjimdak.

There are two major restaurant chains serving Andong Jjimdak all over Seoul. The first must-try is, surprisingly, Andong Jjimdak. It serves large portions of Andong Jjimdak, both bone-in and boneless, accompanied by kimchi and dongchimi. The dong chimi is especially tasty because it counteracts the sweet, greasy taste. This version of Andong Jjimdak is not very spicy, so good if you are not a fan of spicy food.

Another famous restaurant is Bongchu Jjimdak. They also serve huge portions of the dish, and their sauce is generally perceived to be a bit cleaner and lighter. It is also not a very spicy variant of Andong Jjimdak. Dongchimi and kimchi are served with it.